Remember the wave of heat back in June? We hadn’t even started the summer of 2017 yet and we were in the midst of a 9 day stretch of temps that were 86 degrees or higher. 5 of those 9 days were in the 90s. With the official start to summer still a week away–we all had that sinking feeling that this summer was going to be a scorcher!

For the next month, the extreme heat had disappeared. While areas just to our southwest were baking–we would only manage 2 out of 38 days at 90 degrees or higher. Many of those days were in the 70s and low 80s. The comfortable temps encompassed nearly the entire month of July.

Here’s a look at our cooler than average month-to-date temps in July:

PHOTO: The red areas have experienced much warmer than average July temps whereas the Great Lakes have seen continuous pushes of cool, dry, and comfortable Canadian air keeping our temps below average for the month.

A big reason behind the cooler temps is the absence of drought conditions. Dry soils heat much quicker than soils with moisture–and when you have a large area of dry soil as you have in a drought–you have a large area of heat! We’ve maintained (and recently exceeded) a good water supply in our soil–which has helped tamper any recent streaks of heat locally!

Take a look at the rainfall in the Midwest over the last 7 days:

And for the last two weeks:

WHERE DO WE GO FROM HERE?

While temps are sure to fluctuate over the next few weeks, most models are painting a picture of near-average or slightly below average temps for the next two weeks. The upper flow has been consistent out the northwest every 3-5 days helping prevent that serious heat from building and staying in NW Indiana. This pattern looks to continue with the bulk of the summer heat remaining out west for the remainder of July and periodic cooler, drier airmasses moving over the Great Lakes.

Here is the GEFS ensemble temp predictions through early August. Remember to take these computer model predictions with a grain of salt as they change often. They are good, however, at picking up trends. The thing to notice here is that no long heatwaves are expected through what is typically the heart of summer.

And here is the temp take for the GFS: 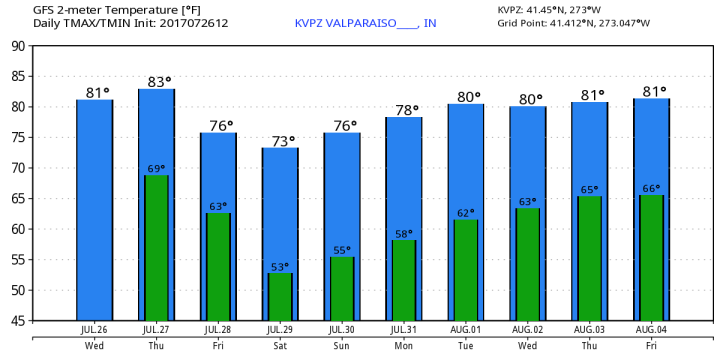 While we’ll have hot days, it appears that the 90 degree heat will stay away for just a bit longer! Still a long way to go as we have the remainder of August and September before we can begin to say goodbye to the heatwave potential!

Region Weather will continue to keep you updated!