Our well-advertised storm system is now developing in the southern Plains and will head northeastward tonight bringing snow in the to Region from west to east. Our forecasted snowfall totals remain unchanged from the last few days with a general 3-6 inches in the Region through late Saturday. We’ll add additional snowfall to the mix with a band of potentially heavy lake effect snow that develops Saturday night into Sunday–but the band of snow will be localized as lake effect typically goes.

Let’s get down to the timing details. 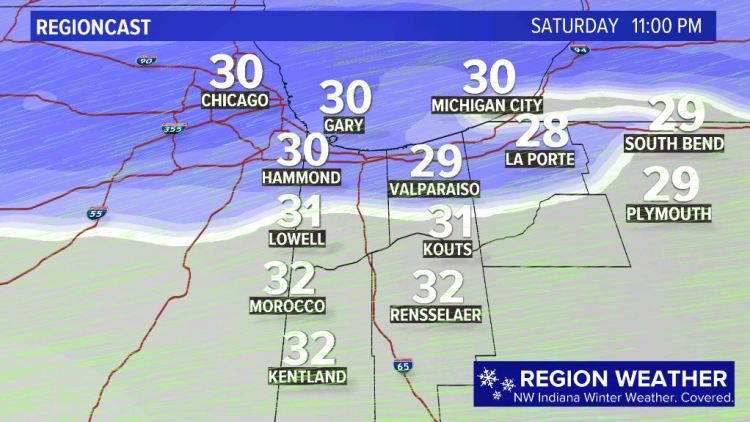 Our next stop takes us to Saturday morning. Light to moderate snow will overspread ALL of northwest Indiana. This will be our snowiest timeframe–roads are likely to become slick and snow-covered once you’re up and at em’ Saturday morning.

By midday into the early afternoon, I think we get some drier air into the system and we may see a break in the snowfall. Models aren’t picking up on this, but I think by early afternoon the bulk of our snow is off the to our southeast.

Winds will pick up and temps will continue to drop into the afternoon Saturday as this storm REALLY cranks up to our east. We’ll be on the lookout for lake effect bands of snow to develop–with a northeast wind they’ll likely begin to target Lake County and the Chicagoland area.

As the storm cranks up towards upstate New York and New England, our gusty wind will begin to shift from the northeast to the north and eventually northwest. This wind shift will bring our anticipated lake effect snow band from Chicago and Lake county into Lake and perhaps Porter county Sunday. You know the drill on lake effect. Outside of that narrow band of snow–nothing. Inside the band–heavy, localized snow. This could easily add several inches of snow to our existing totals where it sets up.

In terms of totals, I mentioned at the top that we’re still sticking with our 3-6 inches. Highest totals will be:

This system will be MUCH more impactful east of us (and even downstate)…but we’re still in line for a decent snowfall that thankfully falls on the weekend.