I’m not a big fan of long term forecasting. Those that have known me long enough have heard my thoughts on any forecasts beyond 7 days. If we can’t accurately tell you how much snow we’ll get with a storm a few days away, how does anyone tell you how much snow we’ll see the entire winter? It gets a lot of clicks though! I get all of the “signs” of La Nina, El Nino, Atlantic and Pacific oscillations…but spare me the 45-day forecast Accuweather…none of it is accurate at all. People just don’t remember to go back and verify it weeks or months later.

That being said…it’s fun to look!

Alas, I introduce to you: A WAY TOO EARLY LOOK AT THANKSGIVING WEEK

After this Sunday system moves through, we’ll see our next storm move through mid week with a brief warm up ahead of it and a brief cool down behind it. Temps will remain cool, but seasonal. Next weekend is where it gets interesting…

Models have been consistent for the last few days with the development of a large storm system somewhere around the Great Lakes as we go into Friday and Saturday. Warm air out ahead of it will quickly turn to a cold shot of air on the backside of the system. Wind looks to be a factor too. Most models agree this potential storm will bring a slug of cold air down from Canada once again…except this time it may stick around for a 3-5 day stretch.

Again, a way too early look. BUT, we may see some decent lake effect snow–most likely in SW Lower Michigan–but should this system bring in more of a northerly wind, we could see decent lake effect in NW Indiana late next weekend into the beginning of Thanksgiving week. The cold temps look to stick around for the few days leading up to Thanksgiving. If another storm system were to develop, we could have precip-type issues with wintry precip possible as any moisture moves into our cold airmass in place. Again…wayyy too early. Just thinking out loud. Here are some pretty pictures to back up my thoughts…

PHOTO BELOW: RIGHT NOW, COLD AIR IS LODGED JUST TO OUR NORTH AND WITH A ZONAL FLOW, THE COLDEST OF THE AIR ISN’T ARRIVING ANYTIME SOON

PHOTO BELOW: NEXT WEEKEND, THAT MAY ALL CHANGE AS A SYSTEM DRIVES NORTH INTO EASTERN CANADA WHICH IN TURN DRIVES ALL THAT CANADIAN COLD SOUTH INTO THE GREAT LAKES AND NORTHEAST

PHOTO BELOW: RESULTING HIGH TEMPS MAY STICK IN THE 20S AND LOW 30S AS A RESULT. COLDER THAN AVERAGE AND COLD ENOUGH TO SUPPORT THE WHITE STUFF 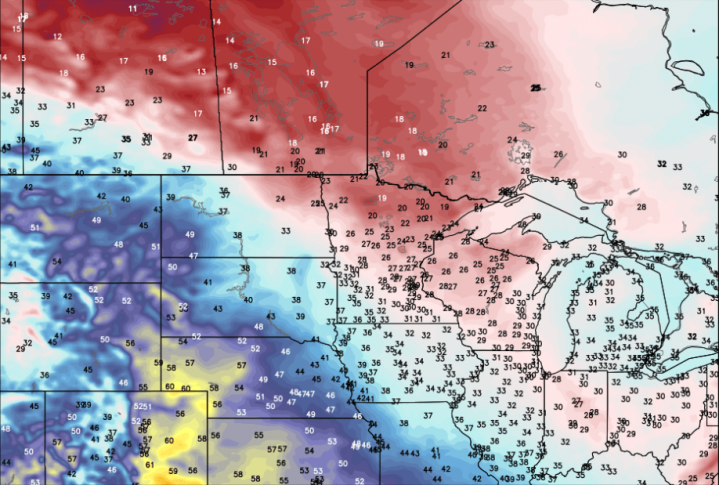 PHOTO BELOW: SOLID SNOW COVER TO OUR NORTH IS A SIGN THAT COLD AIR WILL HAVE NO ISSUES SLIDING SOUTH. WE HAVE IT NOW BUT IT’S NOT SOLID

PHOTO BELOW: HERE’S PREDICTED SNOW COVER NEXT WEEKEND–LOOKING MUCH MORE SOLID AND EVEN COATING THE EASTERN LAKES WITH SOME SOLID TOTALS. PERHAPS A SIGN OF A COLD START TO DECEMBER 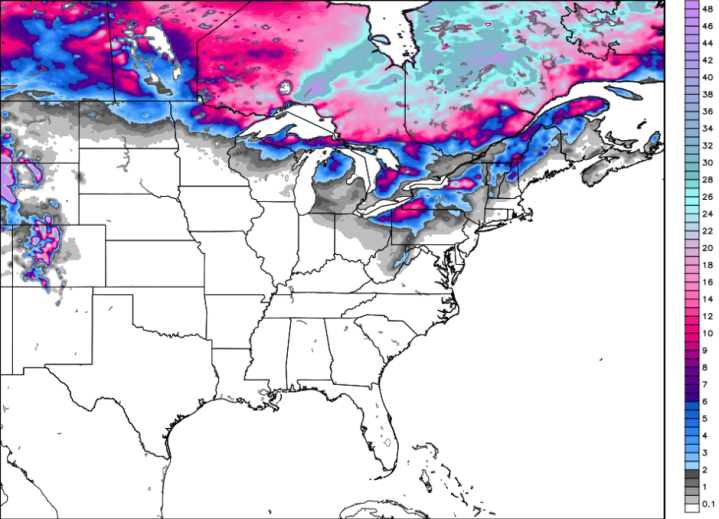 Did I mention it’s way too early to look at this stuff?