Last week’s incredible snowstorm across the northern Plains caused all sorts of problems for the Dakotas and southern Canada. The leaves were just beginning to fall and the majority of trees still had thick foliage. 2-3 feet of snow fell in spots and combined with winds up to 60mph, a large portion of North Dakota was shut down with impassible roads and widespread power outages. Here were some of the reported snow totals: 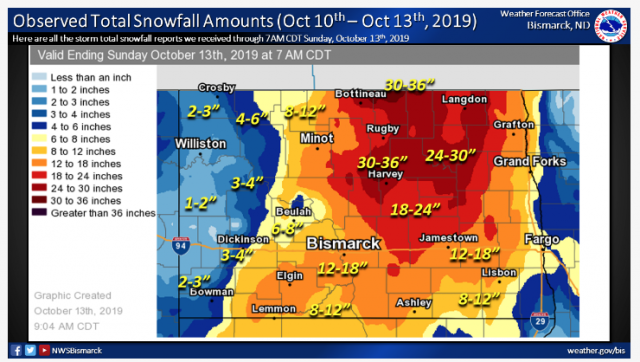 To the north in Manitoba, a state of emergency was issued with drifts of snow to 4-5 feet and numerous power outages.

An early winter storm with heavy wet snow caused fallen trees, many on cars, and power lines in Winnipeg early Friday morning, October 11, 2019. Snow clearing crews were forced to hit the streets to clean up the damage.John Woods / The Canadian Press

John Woods of the Canadian press writes: As an early season snow and windstorm hammered Manitoba over the weekend, Marlene Beardy’s pregnant granddaughter found herself stranded in Lake St. Martin, three hours north of Winnipeg, without heat or power and days away from giving birth.

“There was no heat, nothing at all. No lights, no heat. Nothing. Period,” said Beardy, an evacuee from the northern Manitoba community, who was waiting to check into a hotel in Winnipeg on Monday.

Thousands of people have been evacuated from northern First Nations communities in Mantioba as Manitoba Hydro works to rebuild vast stretches of the power grid in the province, warning it could take four days to restore full power to Winnipeg and 10 days to restore power to hard hit parts of the province outside the city.

Evacuating the northern communities proved especially challenging because the storm, which blew into Manitoba on Thursday night, knocked down thousands of trees, power poles and power lines in the province, blocking roads in places and knocking out both power and, in some areas, cell phone towers and phone connections.

The winter storm was extremely powerful and also arrived before leaves had fallen off trees in the province, so the “combination of rain, snow and wind” piled enough weight on trees and power poles to cause them to collapse, Bowman said.

A crew member from Altec, hired by Manitoba Hydro, clears branches that were near power lines in the River Heights area of Winnipeg on Sun., Oct. 14, 2019. Kevin King/Winnipeg Sun/Postmedia Network