It’s the tale of two totally different weather patterns across the US over the next few days as a large trough digs down into the western US and a large ridge forms over the eastern US. The result will be western record cold and eastern record warmth. In between? Well that will get messy. A large winter storm is expected to spin up in the Rockies and head northeast through the Dakotas bringing an early season blizzard to portions of Idaho and Montana!

Look at the temps that set this thing up. Record warmth in the east. Record cold in the west. When you see this, you know something is amiss. 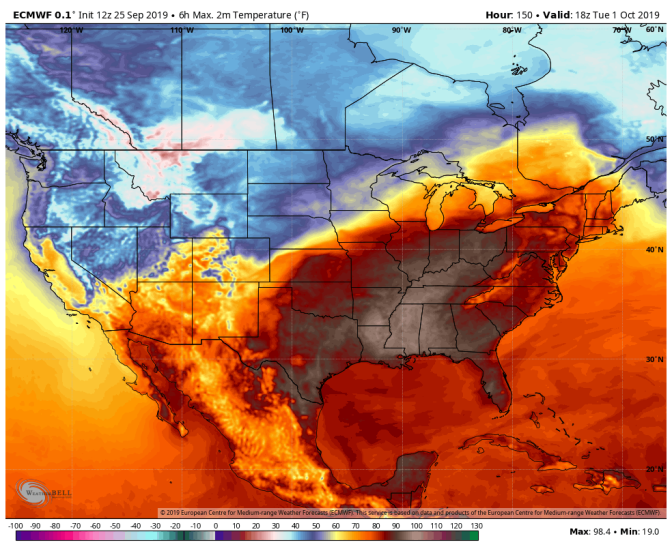 Here’s what the storm system will look like on the surface map with a big old low pressure developing in Wyoming and zipping northeast. Heavy snow will be common on the backside of this system with some impressive snowfall rates. Combine this with 60-80 mph wind gusts and we have ourselves a dangerous storm!

Check out what the local National Weather Service posted today on their webpage:

Snowfall amounts will exceed a few FEET in spots. Highest model totals are checking in around 54 inches maximum. Incredible.

This affects us here in the Region in two ways. First, it will continue to push warm, summer-like temps northward out ahead of it keeping our streak of above average temps going…

Second, this storm will lay down a healthy snowpack in the Rockies and southern Canada. Our cold outbreaks in late October, November, and then, well, winter ALL rely on early season snowpack to get this far south. With snows becoming more common in Canada this month and October, it will become much easier for the cold to slide southeast into the Region. We’re seeing several indications that this winter may be on the cold side with similarities to 2014-2015. Still a bit early to tell, but early season snow north and west of us certainly sets up that scenario!